Hank Shaw. The man, the Chef, the culinary genius.  For those who don’t know, Hank Shaw is a chef hailing out of California, who in my opinion, has revolutionized wild game cooking.  He maintains a website that documents his numerous wild game recipes and has crystallized his extensive knowledge into several books.   Were not just talking a pot of ground venison chili either (although he has a great recipe for this in Buck Buck Moose), but elegant meals such as Duck aux poivre, venison in morel sauce and barbacoa.

Hank’s recipes exude a rare combination of worldliness and technical detail all supported by solid wild game theory.  He seems to be constantly exploring foreign cuisines and creatively merging them with wild game.  His efforts and dedication to perfection are obvious in each new recipe I attempt.  My current status of “no failed recipes” is likely due to Hank’s expertly crafted recipes more than my skills to implement them.

While cruising around on his website I noticed that his recent tour for his new book, Pheasant, Quail, Cottontail had some Canadian dates.  More importantly he was planning a book dinner in Toronto on a date I actually had a chance of making.  Even more importantly, the dinner was to be held at famous Antler Restaurant; a place I’ve always wanted to visit.  Everyone seems to know this place by its chef’s recent clashes with vegan protesters.  I imagine though that anyone who stops in soon learns that there is more behind this place than just the one dimensional media coverage it has received.  The chef, Michael Hunter, has some serious cooking chops and knows his way around Canada’s wild game species.   A simple call to Antler, and moments later I had a reservation for this event.  Now I just had to wait a few months.

The day arrived.  It was a Monday, and I had a just started a week of vacation. I left Kingston in my rear view mirror around 2 pm and arrived in Toronto an hour or so early.  I decided to kill a bit of time in the nearby bar “the Loveless Cafe”.  It was a good choice as the beverages were delicious and the decor was really getting me in the mood for the game dinner that awaited me at Antler.

The exterior of the restaurant is simple and humble.  The meal, although comprised of simple ingredients, was much more extravagant with an obvious flair that showcased species covered by Hank’s new book (Pheasant, Quail, Cottontail) and local igredients.  The menu was a combination of Hank’s and Michael’s creations and I could spend pages raving about it.  Instead I’ll let you browse the menu and give your saliva glands a workout while perusing some pictures.

(Both the terrine and duck liver mousse were light, flavorful, and worthy of praise) 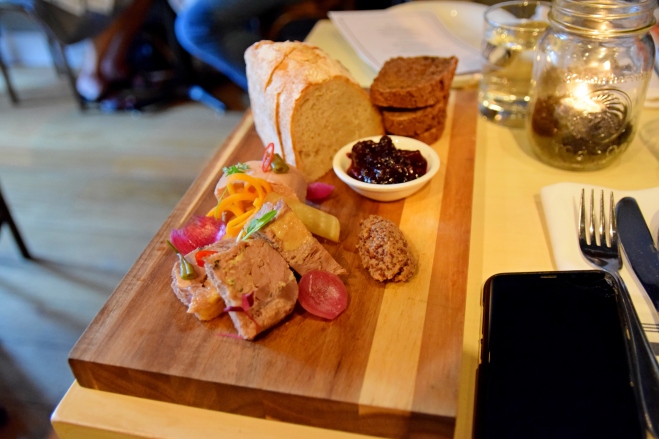 (Much of my upland game culinary experiences have centered around grouse and woodcock.  I can honestly say that the main dish of Pheasant Cacciatore was every bit as good as the finest forest chicken I have enjoyed)

As the meal progressed, my interest in taking pictures waned and was replaced by a desire to enjoy as much of these delicious meals as possible.  You can’t eat pictures right.  Not to mention I became preoccupied with sharing hunting stories with fellow wild game enthusiasts that sat on either side of me.  In my experience, most hunters jump at the chance to tell the tale of their last seasons hunt, even if they have a full mouth and especially if they are somewhat new to the game (myself included).

To cap the experience, Hank actually made the rounds to chat with those who attended the dinner and was more than willing to share his experience and answer questions about specific meals or species.  I can honestly say I was impressed with the depth of his knowledge.  Really though, after reading so many of his articles and trying out his recipes, it didn’t really surprise me.

Thanks again to the staff at Antler and to Hank for putting on such a great event and for all the efforts put into exploring wild game and bringing it into the mainstream.

Cheers from the table,