I have been turkey hunting for close to 5 years now, but haven’t really had any success until the last few years. Of course this has nothing to do with my hunting ability (or lack thereof)…right?  Instead, I choose to attribute my new found success to the property I now hunt and three years of turkey hunting with some skilled fellow hunters.  These gents grew up hunting the fields, hardwoods and shield ridges of the area and they seem to know the local wildlife like the back of their hands.    They taught me the sounds to listen for, animal habits and patterns, how to call and basically all the tid-bits of information required to understand how to Turkeys.   Exposure to seasoned individuals like these was exactly the thing I needed in order to cut my turkey teeth.  I’m certain it is this experience by osmosis that eventually led to my first successful solo turkey hunt and the harvesting of my second bird of the year (my first Tom).

We started out around 5 am, and headed into the woods on one of our favorite properties to hunt. The property was a mix of active agricultural lands, small pasture and hay fields,  and a large maple bush located next to a small lake.  This is a dream mix for turkey hunters and we often encounter many birds here during deer season.

Despite the perfect habitat and some promising gobbles, we struck out that morning.  Deflated yet still optimistic we returned to our vehicles.  I wasn’t quite done though and decided to head to another area at about 10 am where we had harvested turkeys in the past.  I settled in to a rhythm of short nap, wake up, call, repeat… After about the third cycle I woke up to see three birds staring at my hen and strutter decoys from about 30 yards away.  my gun lay on the grass beside me and my decoys were between me and the birds.  This was going to be tricky.

Thankfully the birds milled about behind some tree cover as they continued to size up the strutter, reluctant to make a move on the hen.  This gave me a few periodic moments where I could inch the gun up to my shoulder and take a shot.  Moments later, a Jake was down and my yearly tradition of wild turkey for mothers day dinner was saved. 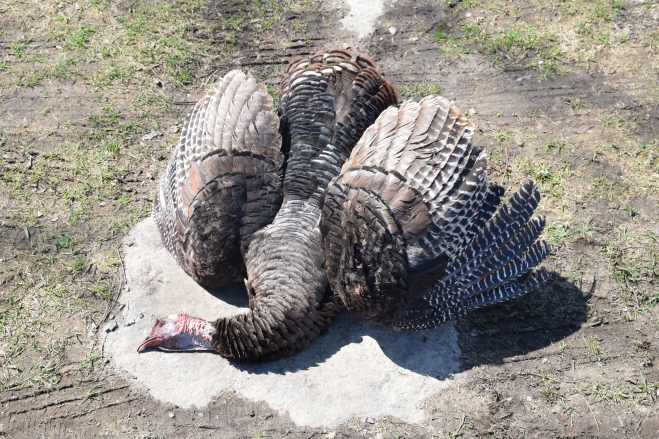 The following Friday, my co-worker came into my office around 11 and casually joked about leaving early.  I looked up from my work and paused.  There was an awkward moment of silence where our minds started to process the possibility of actually following through with this.  Were my projects caught up? Did I have any meetings later that day?  Our mutual realization that we actually could take the afternoon off started to become obvious and our conversation changed into more of a “how to” than a “should we”.

Fast forward, we returned to the clearing where I shot my first Jake hoping the other two would still be there.  Again, we settled into the short nap, wake up, call regime… Things were quiet with the exception of a group of flickers that seemed to be playing in the clearing.  Then a barred owl chimed in and the game changed dramatically.

An immediate gobble sounded from further in the woods.  The owl sounded off. The gobbler returned in kind.  I struck up the box call and let out a series of 4-5 yelp kee-kees, which at first, didn’t seem to be phasing the gobbler at first.  The owl went quiet and suddenly the gobbler started to take an interest and began returning my calls.  After about 3 round of this I let off the call and waited.  The gobbler seemed to be getting closer and continued to gobbler in efforts of attracting our non existent hen.  Moments later I made visual contact and excitedly reported to Dave that there were two birds and both were sizable.  I continued with some light putting and purring and the birds continued to advance, albeit at a snails pace.  Finally they were both in view, the smaller bird taking my left shooting lane and the bigger sticking to the right.  We began a count down to shooting and were about to pull the trigger when the birds decided to cross paths.  The larger decided to trade places with the smaller and the shot clock was back on. 3, 2, 1….My big bird was down and the smaller bird was off into the wind. 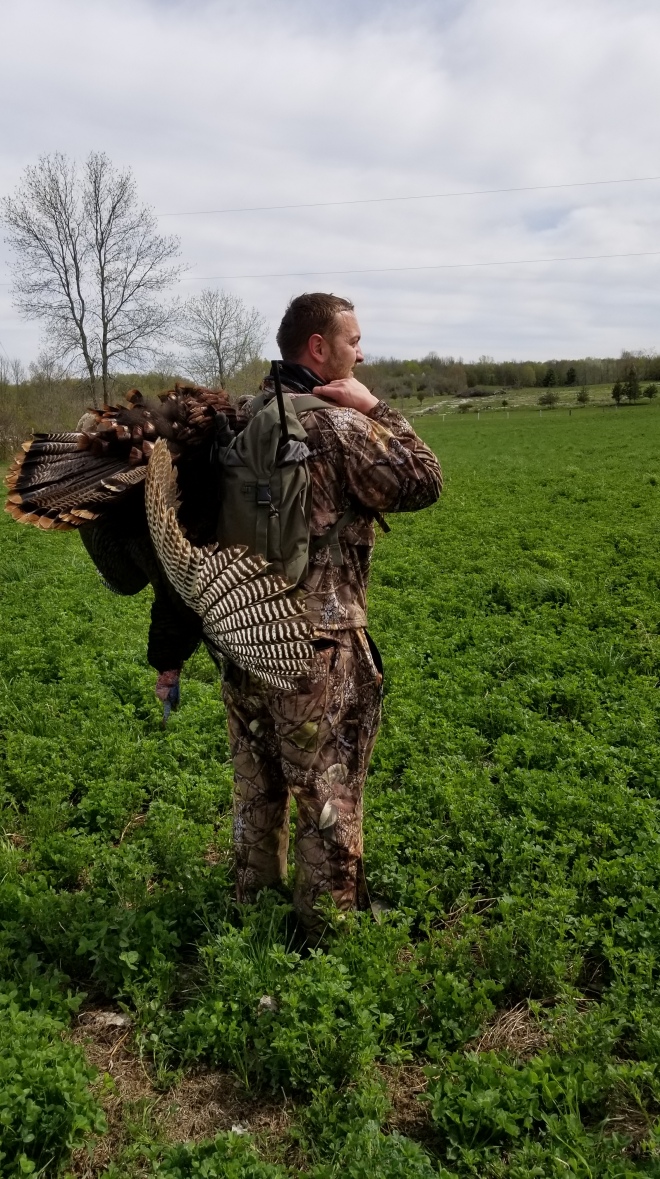 Despite missing out on the double, the experience was good fun and full of lessons to be learned.  I’ve done my best to summarize these below in order to help out other beginners out there.

1) Turkey hunting is an all day affair.  Mornings, as exciting as they are with all the calling and hootenanny, don’t hold a monopoly on bird harvests.  My solo bird was harvested around 10:55 am.

2) Remember the location of every bird you locate.  You may not connect with it on your first encounter, but knowing its general vicinity can go along way to help you harvest it at a later time or day.

3) Be quiet.  Be still.  Be Patient. A gobbler may stop calling back, but that doesn’t mean he has stopped looking for you.  Patience kills turkeys.

4) Turkeys don’t always come in loud and aggressive.  Be ready for the subtle silent approach.  My bird came in with a group of jakes and didn’t make a peep.