We are a week away from the opening day of bass here in South Eastern Ontario.  Most people are spending the weekend polishing up their spinner baits and putting new braid on their bait casters in preparation for this holy day. For me though, this is just another weekend to chase the last remnants of spring pike around with the bonus of little to no boat traffic to get in my way.  Kicking things off at 6am, my friend Dave and I took the 45 minute drive to the Crosby/Westport area and launched at Newboro Lake.  I had only ever fished Newboro twice before, and Dave had never been, so although we had a slight inkling of where to start, the majority of the trip was an exploratory one.

As almost always for spring pike, we started with a troll line using spoons on a line that had produced on my previous two trips (thank goodness for Navionics path tracking!).  This produced two decent 2 -3 lb pike.  Moving on we tried a two edged approach by trolling along sharp drop offs near a set of islands where the depth changed from 9 to 25 ft over a distance of about 15 ft.  One line targeted the shallows and the other probed the deep. This produced some pike as well as a decent 2 lb out of season small mouth that was promptly released.  On to the next area! 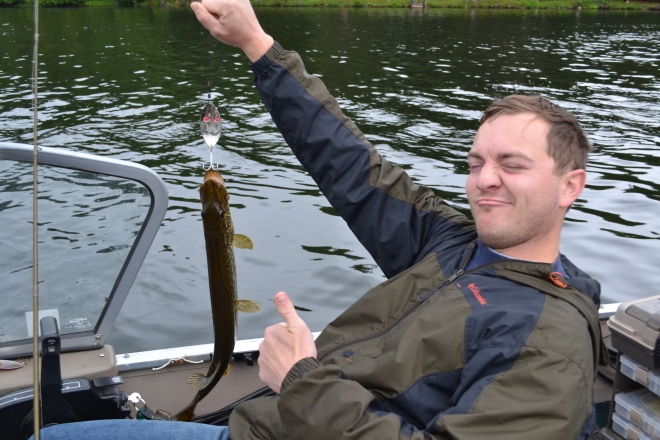 We toured around a good 1/2 of the lake and continued to pick up stragglers throughout the rest of the morning using a multitude of techniques including spinner baits, crank baits and even some extra large swim baits.  Fish were caught in a variety of depths and conditions indicating a high degree of variability.  In my opinion this is indicative of the transition between spring spawning and the usual summer haunts.

The trip was a great way to explore and put some time into getting to know the lake.   Not to mention a great way to relax after a busy week in the office.

Hopefully next visit will see us catching some of the elusive walleye that are said to inhabit the lake.

All in all a great way to warm up the rigs for the fast pace action that is bass fishing in southern Ontario.

Cheers from the wild!