As promised, here is a report on my recent trip to the Great body of water known as Lake Nippissing.

-contains over 40 species of fish including the popular walleye, pike, bass and musky

We left Bethany around 9:00 am and head North towards a weekend full of fishing.  We arrived at Promised Land Camp around 11:30 and proceeded to unload our gear.  After a hurried bout of unpacking we jumped in the boat and headed out on the beautiful south arm of Nippissing to warm up with some big pike.

Unfortunately, the pike weren’t cooperating and we knew it was time for a change.  So we picked up a friend from his dock, changed out our pike gear for light lines and headed out to big water to chase some Lake Nippissing Walleyes.

Although the MNR reports that the walleye populations are statistically seeing a decline, the decline was not apparent during our stay here.  The minute we hit the big water and dropped our lines we were catching fish.  Fish were generally caught while trolling in and around the multiple shoals dotting the lake in depths ranging from 40 to 20 FOW.  All said and done, we caught 23 walleye in the afternoon of the first day, 27 walleye during the morning of the second day and 23 walleye during the morning of the third day.  Not to mention multiple smallmouth bass and perch caught incidentially.  Although these numbers are encouraging, the more exciting thing to see was the variety in sizes.  The fish caught seemed to be evenly distributed throughout the year classes with several fish well into the slot size.  We estimated the largest fish weighed between 3 and 3.5 lbs. 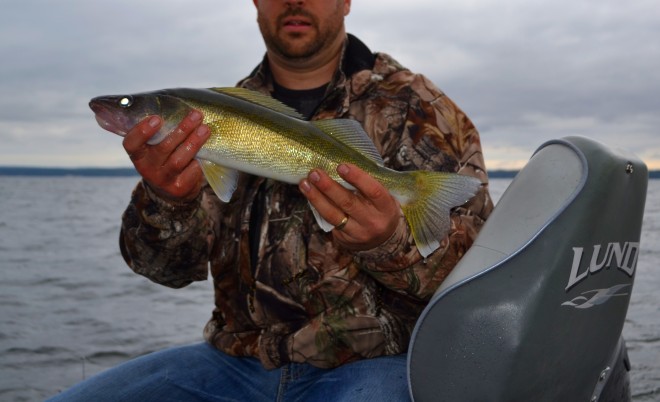 The other interesting thing is where they were caught and the time of year.  Typically walleye start to progress near river mouths during the fall months in preparation for spawning.  Seeing as how we caught these fish near deep shoals, this could be indicative of a healthy shoal spawning strain of walleye in the lake.

Of the 75 fish caught, only 4 were kept.  The remainder were released as part of a conscious decision made to benefit the fishery.  My thought is I want to be able to take my children to fish the Nip in the future and have them experience the same success.  In my mind, the only way to directly accomplish this is to practice conservation and actively advocate for the lake. For those interested in learning more about Lake Nippissing Walleye, see the attached link: 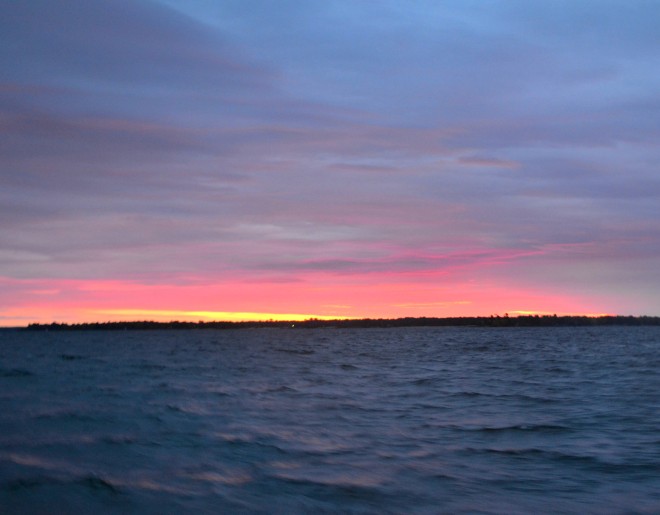 But enough of fishing philosophy.  Back to the report.

We spent a few more attempts trying to locate the big pike that inhabit Lake Nip but succeeded in catching only a few medium sized fish.  Still some pike is better than no pike! (sorry no pics, weather was too lousy to break out the camera)

An additional high point of the trip was the stellar accommodations provided by Promised Land Camp.  The cottages were clean, orderly and very comfortable.  Not to mention the hosts were very helpful and super friendly.  This marks my third trip to Promised Land Camp and honestly, I cant think of a single reason why I would try anywhere else.

I like to give credit where credit is due, so when I have a good experience at a place I make a point to promote it.  If your thinking of a trip to the Nip, here’s a tip: give Promised Land Camp a serious look.

Cheers From the Wild