It’s a week after bass opener, and the annual Collins Lake bass tournament is finally here.  Its the day I look forward to all year, the day I can’t miss.  Is it because there is money on the line?  Because I get to compete with some like minded individuals? Because I get to spend 1 and a half days straight on the water with no distractions? Heck no, its because Fatima, our host, cooks up some unbelievably tasty Portuguese food, which, I get to stuff unceremoniously into my gullet.  Seriously, some of the magic she pulls off could kick some serious butt on master chef Canada, or other shows of the like.  Im talking as good as those tasty videos everyone seems to posts on their Facebook wall.

I could go on about the delectable Portuguese treats for paragraphs, but since this isn’t a cooking blog I’ll get down to the details of the tournament.

For those who haven’t read past posts the tournament is structured like so:

We had a total of 15 participants this year, from all across the province.  The weather seemed favourable, at least for a couple hours each morning, and we were a week after bass opener, which, we were hoping would lead to some calmer fish.  Hoping was the key word. Unfortunately, our hopes were in vain as the fishing was slow.   The fish seemed apprehensive and the bite was light.  Not to mention our afternoons were ruined by some pretty significant winds.  Ever try to cast a senko in 30 kph winds?  I don’t recommend it.

The tournament progressed, and although weights were smaller than past years, we still had a good group of folks near the top after the first day.  there was a lot of room for anyone to run away with the tournament.

My personal weight was much lower than I was used to on Collins.  It seems my luck had run out a bit.  I wasn’t the only one with bum luck that day.  On the way into the launch we came across a boat having motor problems.  it seemed like something we couldn’t fix on the water so we tied the beast to the green machine and towed it back to port.  First time towing for me and the Green Machine.

Weights on the last day were nothing to brag about.  most folks added another 2-4 pounds to their bag.

The winner (my uncle) finished with 9lbs for 4 fish followed by Jim at just over 8lbs, and Jody following close behind. 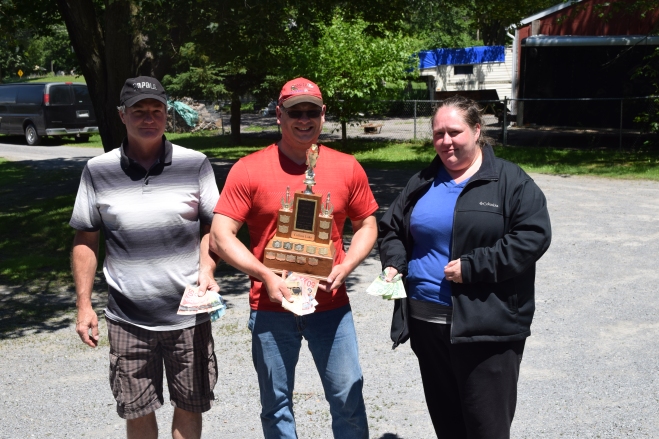 Congrats to the winners.  Fishing conditions were tough and each of you earned it.

Cheers from the wild,