Bass opener is here once again, and so is our annual bass derby.  Unfortunately my regular partner, and former tournament winner, Dave was unable to attend due to some family commitments so my uncle took the opportunity and filled his spot.  We spent the evening before the tournament catching up with the group and loosing money to Jay at cards.  You would think I wouldn’t be happy about this, however I was ecstatic.. Why? historically anyone who wins a cards usually doesn’t win the derby.  A few crumpled 20’s or the big 1K pot?  easy decision!  Finally my uncle and I had enough so we headed to bed to rest up for the following day’s fish.

Daybreak arrived and we made our way to the launch.  Just like clock work we were greeted by the usual early risers from our group who were rearing to go.  We awaited the stroke of 6 am and broke the stillness of the lake with the roar of our engines.  Each blasting off in a hopeful hurry to make it to there spot.

Little did the other fisherman know I had a secret weapon…. a lucky picture made by my wife and daughter.  I’m certain this had something to do with my success.

Fishing was hard right off the get go.  It seemed the big bass hadn’t woke up yet and we fought to get an early morning bag.  Fish came off of shoals that were scattered around the lake and from some weedlines scattered around the shores.  Luckily we found an edge that seemed untouched and we proceeded to pull a nice 3+ lb fish from a pocket. 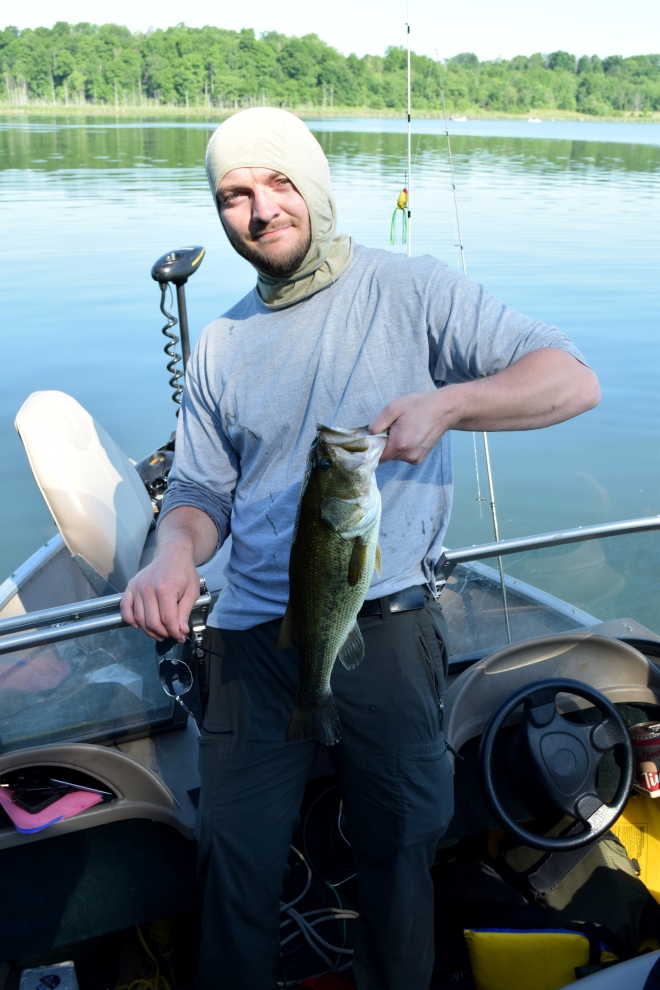 The morning ended with my bag sitting near the top. it seemed I was on the right track but lots of folks were close behind.  It seemed that I wasn’t the only one  who had managed to scrape together a decent bag.  One of the gents even found a nice 4lb 4oz greenback which had him right near the top. 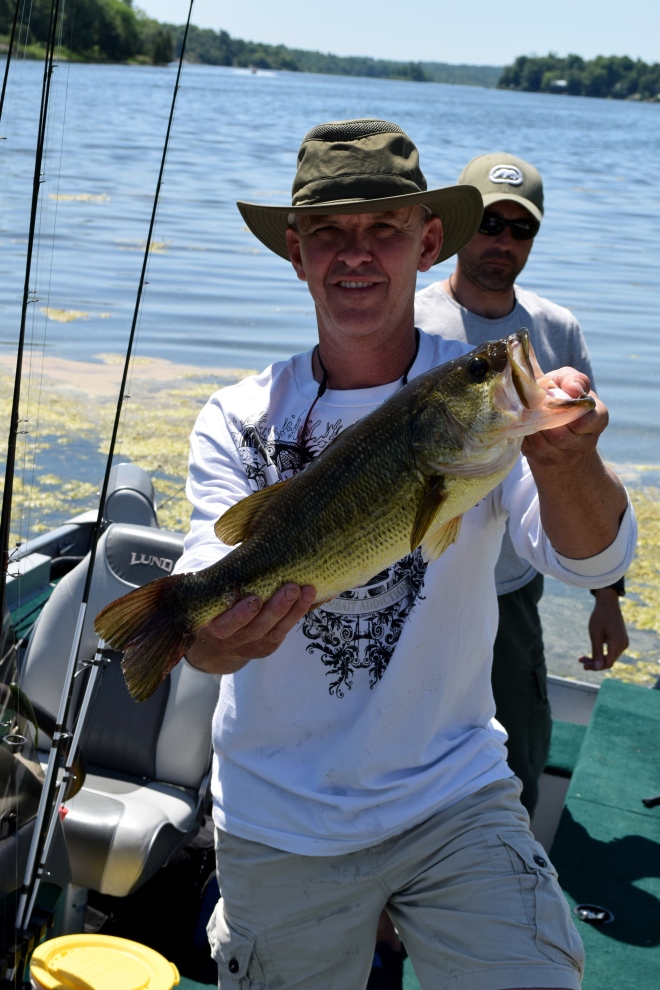 We scarfed down lunch in haste anxious to see if we could upgrade our first two fish.  This was tough to do after the lake had seen an onslaught of boats in the early morning.  Thankfully I managed to eak out a gew more ounces on my bag but it wouldn’t b enough to hold the day.  Jay, who previously landed the big 4+ fish had found some other and ended the day wth a solid 7 lb 5 ox bag for two fish.  Sitting in third, my high 5 lb bag didn’t seem like it had much of chance. Regardless, on a small lake like this, all it takes is one big fish or two decent ones to change the game. 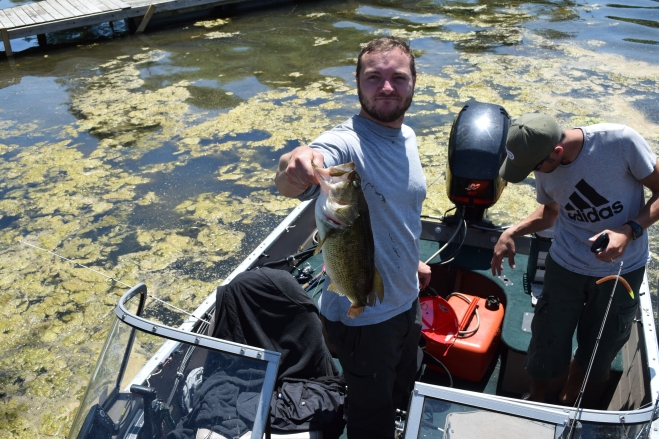 And so the evening came and went and the morning of the Sunday  arrived.  We had from 6 till 12 to add another two fish to our limits.  Frustrated I wasn’t sure where to start.  Typically the first day is always the best and the second day can see the bass shut right down.  I needed two good fish and fast and I had no idea where to begin.

So we did what we did on the first day, we worked our favourite shoal and the adjacent bay in hopes of finding some more fish.  I’m not one to return to a fished spot in the same tourney but I learned something during this tourney.  If your spot is adjacent to big water and has some attractive structure, its likely several groups of fish use the area which means you can return multiple times.  So this si what we did, right up to 15 minutes before the end of the tourney when I caught a decent 3lb 11ozer right fro the spot we first began in.  Now I had 7lbs 5oz to add to my total. 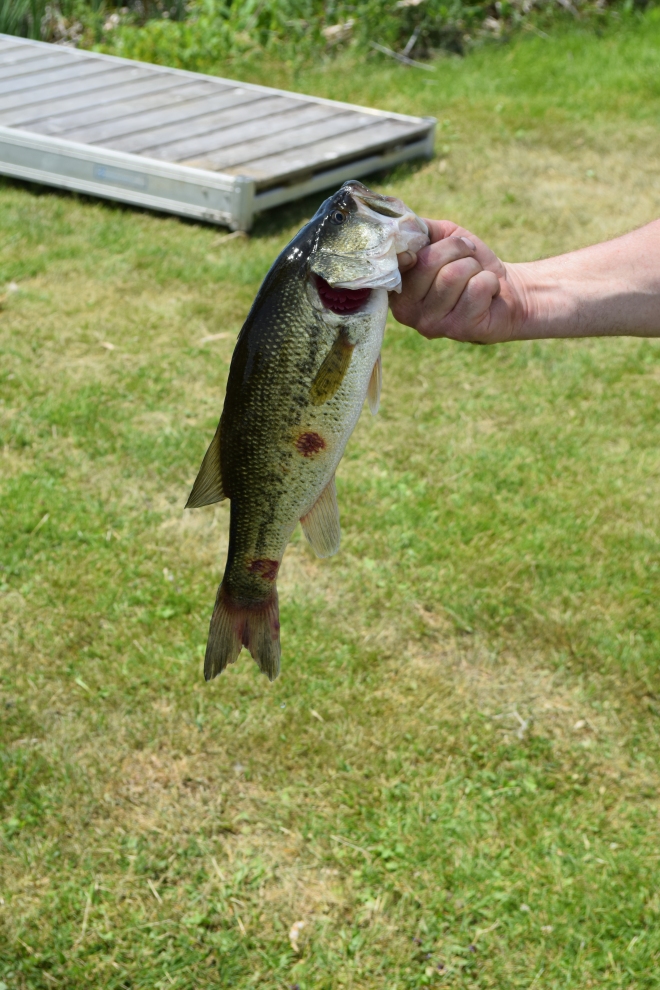 This would put me at 13lb 3oz for four fish which for such a small lake is pretty damn good. In fact, it turned out to be the largest bag ever recorded on the trophy for 4 fish!  I’m telling you it had something to do with the lucky fish picture my daughter drew for me.  Note to self, have her draw one for  every tournament I do.

And so the tournament was over and the trophy will stay in Kingston one more year.

Thanks to Gab and Fatima for hosting such a great event.  You guys are great hosts.  Thanks to my uncle for making the trek down to take part in the fun.  Special acknowledgement to Jay for the big fish of the tourney.  I’ve got a feeling that next year could be your year, all you have to do is loose the poker on purpose!  Oh and somehow get my daughter to draw you a fish picture!

Cheers from the lake,