Here in southern Ontario we are lucky enough to have an over abundance of Canadian Geese.  Although many people consider these large birds to be a nuisance, Hunters know these birds make for some exciting heart pumping hunts, not to mention delicious table fare.  It was for these reasons I decided to head out last weekend with a group of friends to a small back lake north of Kingston.

Unfortunately, as it is with all new hobbies, proficiency depends directly on experience and in some cases, trial and error.   So as it was this time around,  our trip to a back lake north of Kingston, did not yield any geese.   Looks like more tinkering with our set up and maybe a day or two shooting skeet is required.

Regardless, we had loads of fun shooting at the odd solo bird.  As a bonus were able to switch over to fishing to continue the fun once the goose hunting hours dwindled.

Fishing started slow, just like goose hunting, however it began to pick up as Dave caught a meatly little largemouth.

Our approach mostly consisted of senkos and drop shots near rock points and rip rap shores which is standard fall basin tactics here in Southern Ontario.  An when the third member of our group hooked up with a hefty fish we were sure the method had paid off with a giant bucket.  We were in for quite a big surprise when he landed this beautiful golden walleye instead of a largemouth.  And on a senko of all things!  In most cases, this would be just a fluke, but when a second walleye came on the senko minutes later, we decided to give it some credence.

This shook up everything we thought we knew about walleye fishing and we scrambled frantically to figure out this new pattern.

In the end, the pattern didn’t really revolve so much around the lure, but lure placement.  We managed several other decent fish with two well within the slot.  Knowing that the lake seemed to have a decent population remaining, we kept two of the fish that were in the slot for the table and headed back our of the lake towards the car. 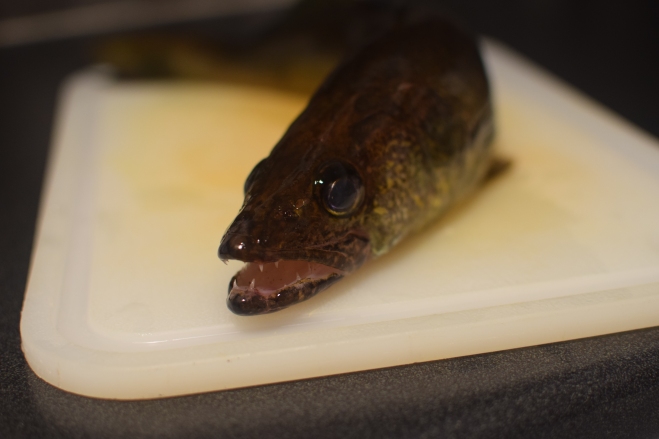 Most walleye anglers have a preferred recipe for cooking walleye.  Although I have tried numerous recipes, I am no different from most as I always come back to the classics.  A flour, salt and pepper dredging and a light fried in butter has always been my favourite way to cook walleye and was the recipe of choice for the fish we kept from this outing.

The complaint I hear most often from people who don’t like fish is that it tastes or smells too “fishy”.  Why does it taste this way? Well, to put it bluntly, your tasting the initial stages of decay in the fish and that means the fish is not as fresh as the supermarket advertisements would have you believe.

Real wild caught walleye (and most other fish for that matter), prepared properly and ate relatively quickly after it was caught, is a true thing of beauty.  The taste is often described as sweet and has a light and flakey texture.  No fish taste, no fish smell.  Fish the way it was meant to be ate.  Even though I was craving goose, fresh walleye is definitely an allowable substitute.