The Bay of Quinte is a Mecca for Walleye fisherman.   Blessed with proximity to Lake Ontario, fairly eutrophic conditions, and several rivers feeding into it, you couldn’t ask for better fish habitat.  Its for these reasons why fisherman flock to the Bay during the winter months to take advantage of the spectacular runs of giant Lake Ontario walleye which are cuing up for early spring spawning.

And so, armed with this information, and an insatiable desire for big walleyes,  I joined the ranks of eager fisherman who have tackled the hard water on the BoQ.

The day started with an early 4:15 am drive to Belleville, with an initial stop at the bait shop (Pro Tackle).  After a quick chat with the knowledgeable owners, I was making my way down Sydney Street to a point along Dundas Street where I would be meeting two of my uncles and three good buddies as well as several members of the Ontario Out of Doors, online fishing forum (here comes the shameless plug! – http://www.oodmag.com/community/).  Several of the members of this forum had arranged for a meet and greet that day at a spot near Potters Creek in Belleville.  I have got to say, fishing enthusiasts are some of the nicest folks out there and a couple of these guys really put a lot of effort into coordinating the event and making the rounds on the ice to introduce themselves and take pictures.  Heck there were even prizes to be won and a big fish contest!  A chance to win swag and fish all day?  Who doesn’t love that.

Being the first of our group to arrive at the meeting point, I spent a bit of time chatting with some of the early risers until finally, the anticipation of some big Bay of Quinte Gold got the better of me and I headed out.

I was set up around 5:45 and fishing hard in 15 FOW.  There was 12″ or more of ice in every hole I drilled which made me thankful for my awesome Finbore auger.  My approach included jigging a shad rap and a set line tipped with a minnow several feet away.  Within in minutes of start up I had a fish take hold of my line and make a run for the bottom.  After a valiant effort fighting the fish to the hole, he finalized realized that something was up and decided to let go of the bait.  More fish activity came and went on the finder however nothing was iced.  That is until the rest of my group arrived…… 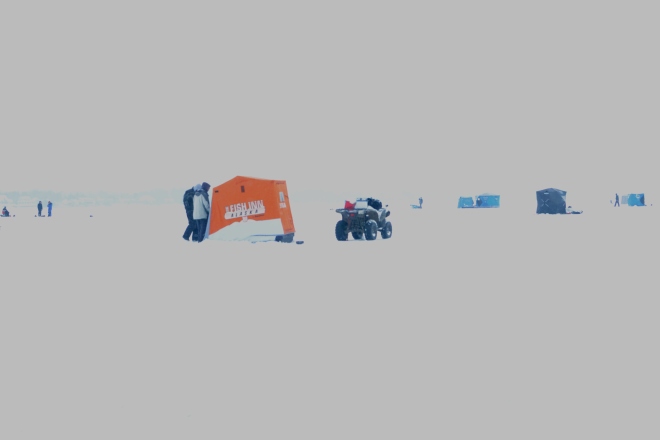 The first fish came on my friend Dave’s line.  It was a healthy fish with some pretty good girth and length.  Not to mention this was Dave’s personal best! 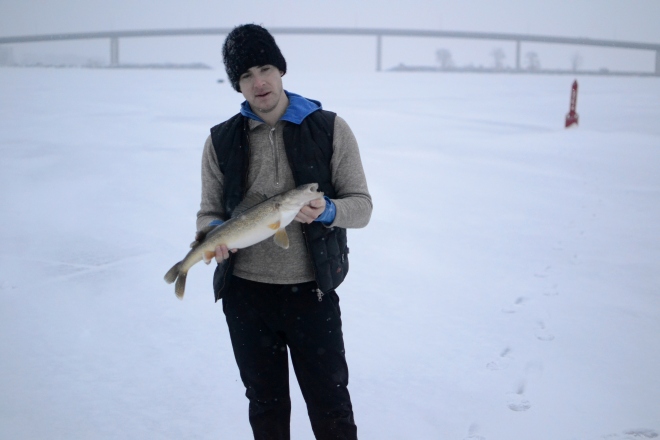 The second fish was caught by my uncle, and it tipped the scales at around 8lbs.  What a tank! 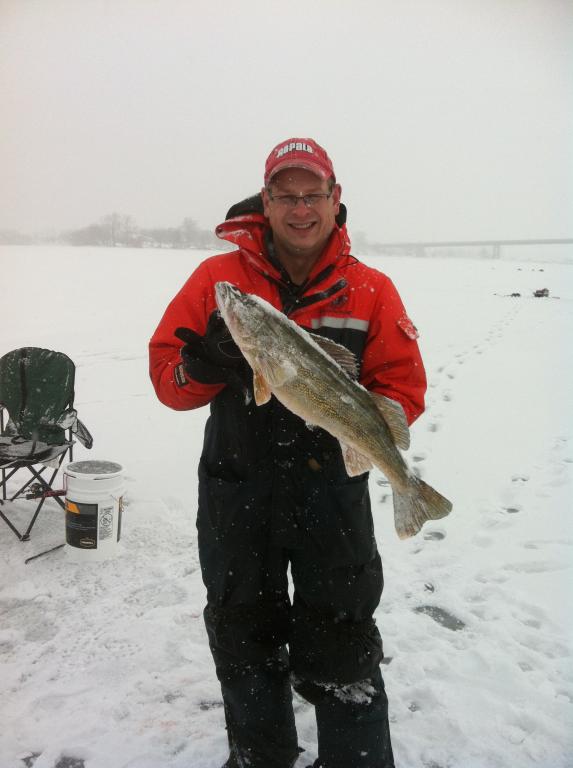 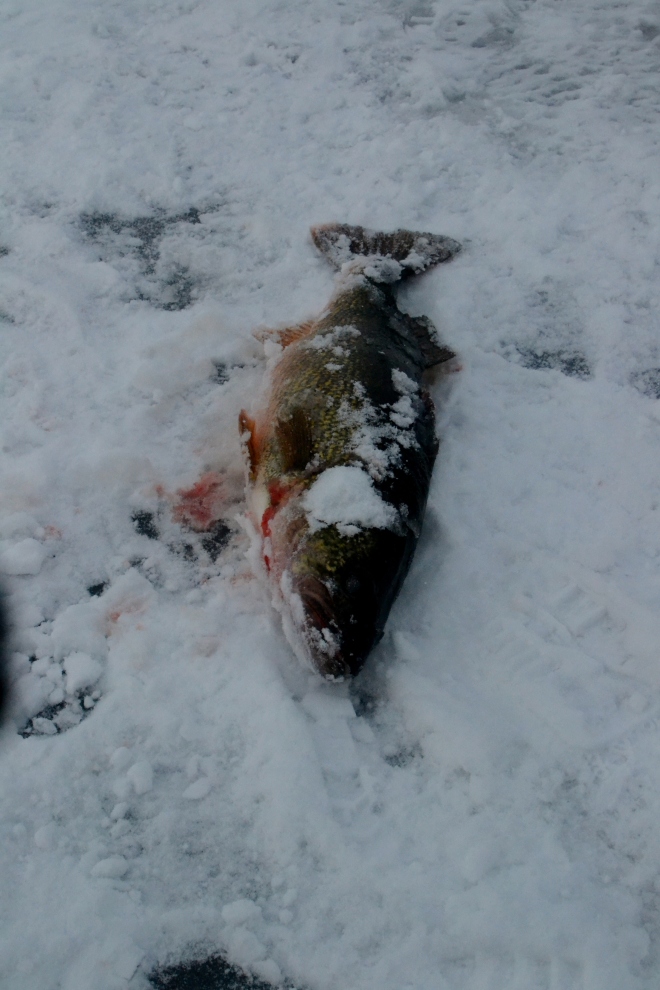 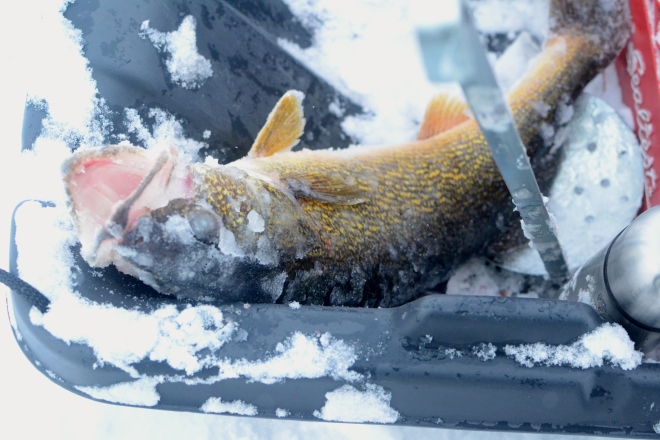 Some times the Bay of Quinte can be tough and can send you home scratching your head with not even a hint of fish.  Other times, she is generous and gives up some of her golden treasure from the depths.  Some times, if your lucky, she’ll even allow you the chance to see some of the giants that lurk below.   Then there are times like last weekend were you not only catch big walleye but your given a shot at something special.  Now catching a gar pike is a pretty rare experience, but as far as I know, catching one through the ice is almost un heard of.

And so it was my other uncle hooked this massive 43″ beast and wrestled it through the hole. 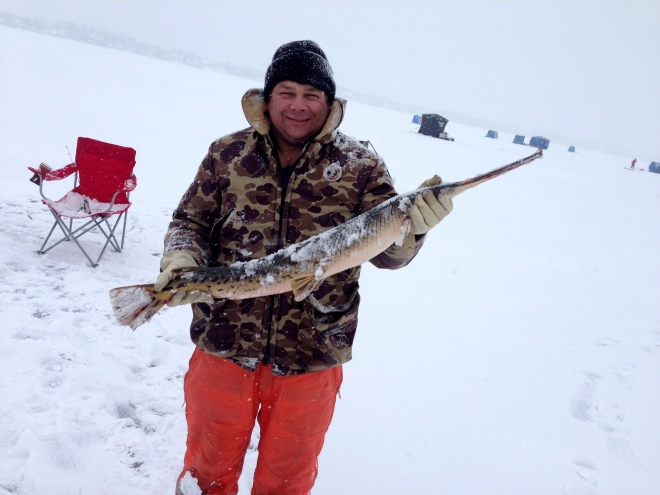 I am pretty sure this fish made his day if not week!

The fish was promptly released to be caught another day.

Although the Bay of Quinte can be tough for catching numbers, its pretty hard to beat the size of fish it produces each year.  So if your looking for a trophy walleye, or if your an avid Gar pike fisherman, pack your gear and  hit up the Bay this winter.